As you well know, this blog has been Palin-obsessed ever since she hit the national scene.  All ya’ll are sick of me talking about Sarah’s personal life.  So here’s some real moose meat for ya, the Alaska Dispatch.  That article title below?  It’s a link!

END_OF_DOCUMENT_TOKEN_TO_BE_REPLACED

I have a soft spot for journalists, true nostalgia for print media (well, I have true nostalgia for a great many things), and a new t-shirt that I’m not sure where to wear.  You see, it’s political, and therefore offensive to some. 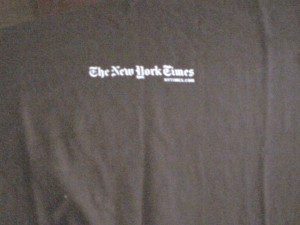 I read the New York Times on Sunday.  In the 14 September 2008 print edition, there was a very comprehensive page one story about Sarah Palin.  I thought it was well-researched and fair.  Only one comment struck me as snarky (below in bold):

I suppose there was never really a ‘good ole days’ when journalism was completely objective. Can anyone be truly objective? It’s difficult. But when I mentioned this New York Times article about Sara Palin to an educated acquaintance, he derided the paper as a completely unreliable source of information.

Excuse me?  The authors of the Palin article say they interviewed “60 Republican and Democratic legislators and local officials.”  But to Palin supporters, the article is skewed.

Nowadays, we choose our media outlets carefully.  We’re mindful that they’re owned by large corporations (who like anyone else, tend to be self-interested).  But relief is in sight: Sean Hannity is interviewing Sarah Palin at 9pm eastern today!

UPDATE: Here’s one of the best political blog posts I’ve seen to date, courtesy of the brilliant LeahPeah.