Today is my friend Susan’s birthday. I met Susan at Westmont College (lack of link intentional) in the fall of 1980, and we were roommates in Santa Barbara the following year. Even then, Santa Barbara was an expensive place to live, and we shared a one-bedroom apartment. I was working full time, and half of my income paid my half of the rent ($400). I was making $4.32 per hour. But I loved living in Santa Barbara…it was an easy bike ride to the beach, and at night we would hear the seals barking at the Santa Barbara Zoo.

Susan has been working on Family Oral History Using Digital Tools, and right now she is preparing for a Genealogical Society event this weekend. That’s right, kiddos, when you are self-employed, you work on your birthday. It’s called “the finals week of life.” You have a hard and fast deadline, so don’t sleep much, you drink gallons of coffee, and you eat a lot of comfort food (this time, M&Ms).

Go here to see the very cool and most appropros gift that Susan received for her birthday.

Happy birthday, Susan! We’ll crack open a bottle of red once you’re through this crunch time, yet another installment in that ongoing series: The Finals Week of Life.

Uh oh. I’ve been bitten by the blogging bug. Two posts in one day, while work waiting to be done (=billable hours) languishes on my desk (what desk? I mean the dining room table).

LA Observed got me all fired up about the Griffith Observatory Planetarium controversy in a piece called: Actors or Astronomers?.

The meat of the discussion is here.

In the interest of my financial health, I’m copying the comments that I posted at the meaty link above so that I can get busy with real paying work.

I’ve seen the planetarium show, and my Jane Q. Public reaction is as follows: (1) It is too simple for an adult audience. Why not do a kids version and an adult version? (2) The lame lit orb thing carried by the narrator/actor is cheesy and detracts from the meager content. (3) The actor who “voiced” the show I attended needs to go back to acting school. His voice was fake, almost creepy. At the start of the show, I could hardly believe a real person was speaking. Then his lips moved.

I’d rather a few ‘ums’ and ‘ahs’ from a live astronomical mind than a smooth-talker with nary a slip of tongue. Education is not something we do terribly well in this country, and taking the marrow out of the planetarium presentation is a step in the wrong direction.

I stood in line (30 minutes on a weekday afternoon) and plunked down the dough for the planetarium because I expected to learn something. Instead, in the midst of a performance that was supposed to feel ‘live’ but felt more fake than if it had been recorded, I found myself wondering about the career missteps that lead an actor to the ultimate nutty professor role.

Another wow from the wide, wild world of blogging — Leahpeah.

1. LA Bloggers Live – from the site, “How many times have you wished you could hear your favorite bloggers read live? Bloggers Live! is a combination of Los Angeles bloggers getting together every second Thursday to read a selection of their entries live. Anyone who blogs is encouraged to join the group and sign up to read. Anyone who reads them, blogger or not, is invited to come and listen.”

2. LA Angst – again, from the site, “We gather together to read our most embarrassing, humiliating, angst ridden and otherwise absolutely wonderful writing from our youth. Every month, selected readers comb through their middle school and high school writing and pick something that represents how completely impossible it is to grow up without looking back in shame. Join us for some entertaining, therapeutic and hysterical fun!”

LA Angst is making its debut this Sunday, June 3. You can read about the details here.

I’ll take another shot of courage, Eagles style, and read about life at Lakenheath circa 1975.

My calendar runneth over—lots of blogging events this weekend (via Metroblogging).

Photos by Tim Down

It is May in Pasadena, and May is jacaranda time. The photo above doesn’t quite capture the fullness of their purple-y glory (camera phone, no direct sunlight), so I’m hoping that Eye Level will take up the mantle and post some photos of the nice ones at Caltech. This is the time of year to drive on Del Mar Boulevard (between Marengo on the west and maybe Wilson on the east) whether you need to or not (though do try to invent a reason…you can always hit the Trader Joe’s on Lake Avenue at Del Mar). What am I saying “drive”…that is SO last century! Heck, it is Bike Week here in Pasadena. Take your bike. The jacaranda are splendid.

Caltech: I read Watson’s account of the discovery of the double helix in a science-for-non-science-majors class in college. It is quite a compelling account, made even more real to me because they did the work at Cavendish Laboratory at Cambridge, and I did a year of undergraduate work in Cambridge (at Homerton College– love that photo).

When I first visited Caltech, I burst out laughing when I saw a large rectangular shallow pool with a double helix on the bottom. The pool is just such a literal rendering of one of the great moments in scientific history. A most unusual (yes, I fear tacky) homage–more like a construction project than an art installation. Here’s a photo of the whole thing. Below is a detail photo: 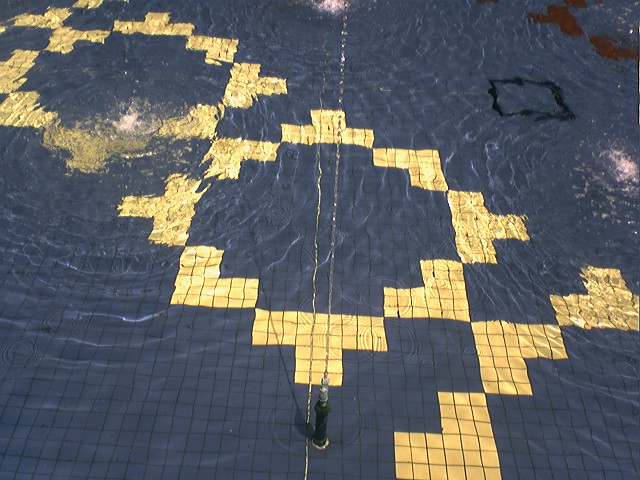 Finally, remember the good old days when we learned the metric system, because soon our whole nation would be switching over to it so that we could be in synch with the rest of the world? That’s what they told me in sixth grade. This map makes me laugh. Only Myanmar and Liberia (those bastions of democracy!) join us in being non-metric. We have this.

I haven’t been a consumer of vlogs (video blogs). Until today. I found Project Pedal’s Episode Four. It is so fantastic I watched it three times. Reminded me of the storytelling style of Fight Club but this guy isn’t crazy. The whole project is completely mind-blowing and inspirational, and I’m so glad I stumbled across it.

Project Pedal is about deciding to do something really hard, “something you know you have a good chance of failing at, but doing it anyways…and slowly but surely, proving yourself wrong.”

So go here and watch Episode Four, and then here to see the rough cut of the pilot opening. Project Pedal’s blog is here. You can watch and vote for Episode One here. And there’s even a Project Pedal Myspace page.

How I stumble upon this fantastic thing? Well, first I went to Metroblogging LA and told myself that under no circumstances should I go to a garage sale. I need to purge, not add. Then I went to Mickipedia because I thought the name was so cute, and because the Metroblog post about her mentioned “superstar” and “gun” and guns scare the bejezzus out of me. So I watched Micki the superstar vlogger shooting a gun, then saw her link to Project Pedal.

I don’t know why I need to include the details of my surfing, but I do. Thanks for bearing with me.

Pasadena Star-News stuff: I was going to link to the announcement about the Open Space Now gathering planned for May 19, but I realized you would have scroll through the news about one (of the two) shootings that happened in Pasadena on Monday to get to that item…

…and that is just wrong.

There was a double homicide in Pasadena on Monday. It is reported in today’s paper (9 May) as one dead and one wounded (Man shot to death is identified), but I went to a meeting of the Northwest Service Area Advisory Board last night (sponsored by Pasadena Police Department), and the second victim died yesterday afternoon.

About 9 hours after the first shooting, there was another shooting. This 16-year old victim is still alive (at least of the time of last night’s meeting). Police personnel also reported on a stabbing that occurred on Monday between the two shootings, but this seems to have not made it into the Star-News at all.

I didn’t go to “J” school (as journalists call it), but it strikes me as odd to put this “hard news” in Around Pasadena, buried on page 2 of the Local News section–right where the police (? say it ain’t so!) or the developers want it, no doubt.

Pasadena residents will never be able to address complex issues of gang violence if they don’t even know there is gang violence in this city. Notice I say residents, because the police cannot solve this problem. C’mon Star-News, time to step up. I don’t want to read about how the Pasadena Fire Department is saving pets on page one of Local News (with color photos), then read about our dead and wounded young men on page two.

My thoughts are with the families of the victims.

From the Pasadena Star-News:

PASADENA – Pasadenans are invited to join with their neighbors and the leaders of a new group called Open Space Now to discuss why it’s vital to preserve the city and region’s natural open space.

The kick-off event will be held Saturday, May 19, from 9 a.m. to noon at Eaton Canyon Park and Nature Center 1750 N. Altadena Drive.

I cleaned behind the refrigerator today.

Anyway, here’s a link to a short article about the “New Media: Blogging and Beyond” panel. Kevin Roderick of LA Observed :

…commented on the transition from print to blogging. “I had to make a transition, learn to put more of myself in the writing ⎯ even in print because I think readers are hungering for much more of a connection with the writers and journalists they read.”

In this age of information, we crave community. Information is important, it is a tool for effecting change–but without community, information does not have a context.

We are all suspicious about where information comes from. In the early days of television, when it was time for a commercial, they used to say, “And now, a word from our sponsor.” At this point we know/feel that every word we hear on television has been approved by the sponsor. We get our news from someone trying to sell us something. Ugh.

That’s part of the immense popularity of political blogs. We get information that traditional media outlets don’t cover. The writer’s opinion comes through as well. It only makes sense that we would want to know a little about the person who is doing the reporting.

Ah, technology. I’m woefully short on patience when it comes to acquiring new skills. Finally figured out how to e-mail myself photos from my phone. So here’s a photo from Lone Pine, CA.