You may have heard that this was the first year that you couldn’t smoke along the Rose Parade route. 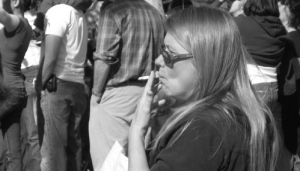 Let’s face it…How is the ordinary nicotine-consuming mortal to endure a 2-hour parade without regular infusion of that calming influence? Especially if you’ve brought your squirmy youngsters out for some Quality Family Time.

There are a host of other Rose Parade rules, like no tents, sofas or ladders and no bonfires. There’s always a sofa or two left behind after the parade (though it seems not as many as there used to be). Of course people bring ladders and watch the parade from them. I gathered some pretty decent, gently used firewood after the parade (I’m now in the market for kindling to go with it).

Forget smoking—the real scofflaws of the Rose Parade are the kids (some even adult-aged) with the Silly String.

The photo below is cropped to protect the identity of the parent who was aiding and abetting this Silly String abomination: 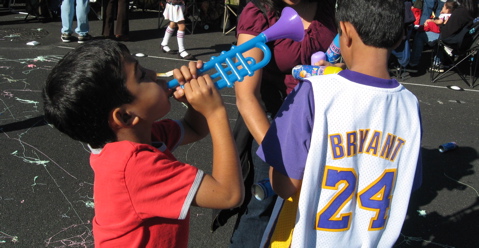 Note disgusting Silly String all over the street. Each can is 75% propellant.

I don’t like when the emPHAsis gets put on the wrong syLAble. I say let the smokers smoke, but crack down on the Silly String. Better yet, take it away from the kiddies and tell them that it is needed for the war effort.

I’ve got an out-of-town house guest fast approaching, so I need to work on the house. (Read: I’d rather blog, but even the Baby Jesus’ manger was more orderly than my abode.)

But I couldn’t leave you hanging without a laugh. No Luck for Levi Johnston will make you smile, no matter what your political persuasion. If I’ve learned anything in the ’08 election season, it’s that political humor is funnier if you’re on the ‘winning’ side.

No wonder so many of us haven’t smiled in 8 years.