The 2008 Lakenheath High School Reunion Awards – To honor the Lancers who gathered in St. Louis at the Millenium Hotel on July 31 – August 3, 2008, I offer these awards. If you have any complaints about the award you’ve been given, you’ll have to take it up with me at the next reunion at your own expense over the drink of my choice.

The “You Kept this Secret All These Years?” Award: Junior JC Clemons, who is listed as Harry Lane Clemons, Jr. in the 1977 Graduation program. He really is Harry Lane. You may call him JC. “Junior” has been dropped.

“Hero’s Journey” Award: Scott Harville (below right) for jumping in the car at 2:00 am on Saturday morning and driving from Florida with his son Argus. Scott and Argus arrived in the STL right around 6 pm. Scott, you rock.

“Best Recall of Decades-Old Facts” Award: Also to Scott Harville for his magnificent retelling of some really scary shit—think ‘scared straight.’ (That’s Rick Zarder on the left and Dave Jester in the middle.)

The “I Love All Ya’ll but I’m in a New Relationship” Award: Phillip K. Mason. “He plays heart strings.”

“Room With the Best View” Award: Kelly Woodson and Becky Tolley on the 26th floor. Why go sweat at the stadium? Sit here, pop open a beer, watch the game on TV, and glance over at the stadium once in a while.

Best “Random Sighting of Fellow LHS-er” Award: Scott Harville, who recently saw Debbie Gunter and her husband at the restaurant where Scott works.

Best “St. Louis Arch Imitation” Award: Alice Spicka, who described what it is like to go to the top of the arch, and told us how we could recreate the entire experience without leaving the hotel. (Step 1 involves getting into a closet.)

The “Thank You for Bringing Your Loaded I-Pod Award”: William Powell (below left, with Jeanine Courtney Krenz), who brought on Heatwave, Earth, Wind and Fire, and others. 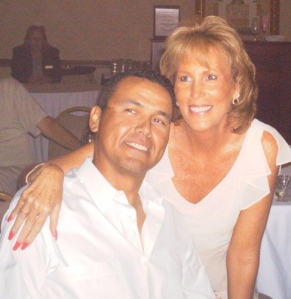 The “Song that Stood the Test of Time” Award: Groove Line by Heatwave.

Honorary Alumni Awards: Jordan Krenz (daughter Jeanine Courtney Krenz & Rob Krenz); and Ian Jester (son of David and Lisa Jester). You know when you hear “Go LHS!” out of the mouths of offspring that there are some effective parents among us.

The “You Get in the Picture Too, Let Me Take It” Award: Jordan Krenz and Verna Spicka (Alice and Sean’s mom—below left with Jeanine Courtney Krenz). Jeanine is the clear winner of the Abba “Dancing Queen” Award. 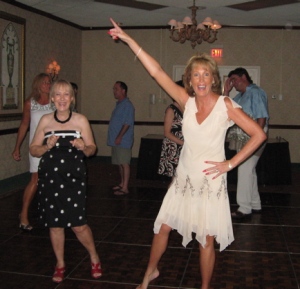 The “Run to the Store and Fetch Me Some Beers and Stuff” Award: Phil Mason, Mike Mason, Rick Zarder, Donna Lopez Powers.

The “Most Likely to Flip the Bird at Any Given Moment” Award: Mike Mason. 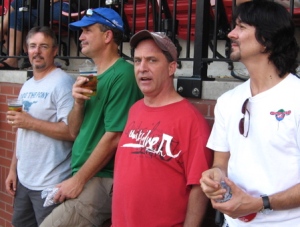 The “Your Great Smile Actually Got Better Award”: Rick Zarder (below) and William Powell (back up there). 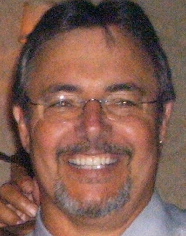 The “Glad You Showed Up Despite Recent Injury” Award: Annette Bryant.

The “Now That I’ve Been to One Reunion I’ll Never Miss Another One” Award: Rudy Thornton.

The “Best T-Shirt” Award: Chuck Lyons. Dude had a t-shirt of the Hotel California album cover.

The “Most Honest Confession About Lakenheath” Award: William Powell, who said, “I hated it there. Maybe I was sick of moving or something.”

The “Are You Shittin’ Me?” Awards:
Non-fiction – Scott Harville
Fiction – Mike Mason

The “Apparently She Wrote Everything Down” Award: Kelly Russell.

The “Most Worried About What She May Have Written About Me” Award: David Jester, who asked me twice to make sure that at least some of what happened at Lakenheath stayed at Lakenheath.

The “I Will Suggest My Own City for the Next Reunion But Not Actually Offer to Plan It” Award: Names redacted in the hope that someone will actually step up.

Best Clarification of Questionable Event: “They didn’t sleep together, they had a long conversation with naps.”

The “Pound the Crown (Royal)” Award (cumulative with the 2007 Reunion in DC): Dean Baines. Serioushly.

The “Existing Legislation Noted With Regret” Award: Goes to the State of Georgia, where oral sex is illegal.

Dean Baines on the left, Scott “Mr. Memory” Harville on the right. Serioushly.

Feel free to add your own award nominees in the comments. Lancers, I love you.

Many, many thanks to Verna Spicka who shared her photos with me.  Verna, you rock!