Don’t get me wrong—I love the personal automobile. But the other day I said to The Scout, “If you really think about it, the idea of everyone having a car is a really bad idea, so who thought it was a good idea in the first place?” The Scout immediately poo-poohed my 2020 hindsight (that’s a good title for a blog!) and said ‘if you had been there at the time, you’d have welcomed the car with open arms too.’

I’m sure I would have. I love cars now, but cars are the new cigarettes. They’re bad for me. Even though they don’t pollute the environment as much as industry does, the energy and materials it takes to manufacture and maintain even one car — wouldn’t you rather see those resources go to the making of art? 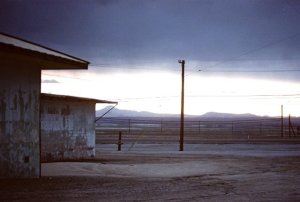 I love the smell of utopia in the morning.

Chevrolet wants to sell cars. So they hire an ad agency. The ad agency is full of creative but insane but wonderful but insane people (ask Miss Havisham if you don’t believe me). I know – let’s make a commercial! Then the ad agency hires a production company.

These folks call The Scout. They say we need and old gas station, but we can’t afford to go far outside The Zone. But there aren’t any good looking old gas stations. So the photos you see here are suggestions. These locations would have to be “dressed out” with appropriate gas pumps.

Where am I going with this post? Car culture is already in decline. Chevy must invoke nostalgia to sell trucks. I don’t need a truck. I wanna be like Mr. Metro.

UPDATE: True confession – It’s completely irrational, but I want this too: