Dispatch from The Scout:

“A frenzied funkosis of fire silhouetting shadowy characters against stroboscopic stabs of colored light. Zounds! I finally understood Huckleberry Finn’s point of view as he was floating down the river, observing from a distance people and the things they do.”

Yes, as AP commented on the churchified post below, that was our neighborhood on the 4th of July. Dozens of people were at the end of their driveways, or even in the street itself, lighting all manner of combustible material to loud boom box music. My inner pyro wanted to join in and blurted out “I wish I had a sparkler!” The Scout remembered that we had three-foot long sparklers we got from the res a few years back. Yes, I indulged, though I kept a close eye on ‘the crocodile’ (that’s what The Scout calls patrol cars) that was a block away.

Yes, I said a block away. I could see the Pasadena Police cruiser a block to the south, while a block to the north you’d have thought the PPD and the Altadena Sheriffs had disappeared in a mutual annihilation exercise. The Scout says: “People were so mesmerized by the bang-bang, they ignored the snapping power of the croc.” My neighbors across the street got a warning. I beat a hasty retreat. I don’t know how it ended up for the 30-40 folks straddling the Pasadena-Altadena border. 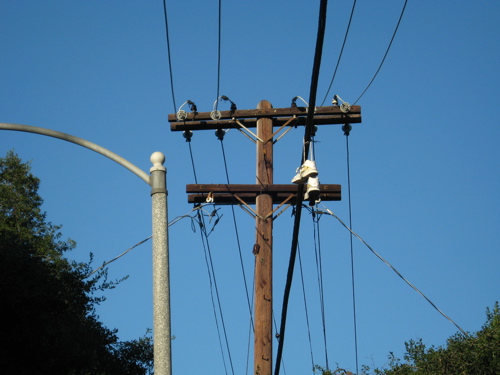 Shoefiti at the intersection of Navarro and Tremont. What does it mean?