This blog is officially CHIUSO PER FERIE until 14 May 2008.

But I’m going to England, not Italy. That’s Norwich castle above. I’ll be spending an afternoon in Norwich (pronounced Nor-itch).

I’ll also be in York for three days. York is so old they don’t even bother to distinguish themselves from the new one. This is York Minster, the second largest Gothic cathedral in Europe (after Cologne Cathedral). 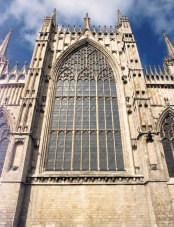 But it’s not all imposing Norman castles and Gothic Cathedrals across the pond. Britain is also the land of the Bacon Butty (photo courtesy of London Daily Photo):

This royal throne of kings, this sceptred isle,
This earth of majesty, this seat of Mars,
This other Eden, demi-paradise,
This fortress built by Nature for herself
Against infection and the hand of war,
This happy breed of men, this little world,
This precious stone set in the silver sea,
Which serves it in the office of a wall
Or as a moat defensive to a house,
Against the envy of less happier lands,–
This blessed plot, this earth, this realm, this England.