The Visitor – It was good. I recommend it. Really, I should be working right now and can’t possibly provide a decent movie review. Oh, alright, here’s a mini-synopsis: A widower-college professor attends a conference in New York City and finds a couple (Tarek and Zainab) living in his pied-a-terre. The couple thinks they have legitimately rented the apartment from “Ivan” but they’ve been swindled. Walter (the college professor) becomes involved in their lives more closely when Tarek is picked up by the police.

Walter is played by Richard Jenkins. He’s one of those guys that you’ve seen in MANY movies, but you don’t know his name. He does a terrific job in this picture. 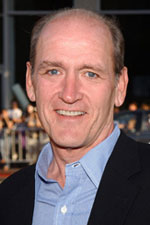 Proud to be from DeKalb, Illinois.

The Tarek character is played by…

But I digress. I like a movie that both tells a good story and points out some stuff that I don’t know. The Tarek character is a legitimate political refugee, but he ends up in an immigration detention center. I did know that the US has detention centers spread around the country, and I had heard that conditions there are more like Guantanamo than regular prison. But I didn’t know that at least one of them is “hidden in plain view” as a warehouse in Queens. Detainees are packed in and there is no recreation yard, just a room with the roof cut out. There is no excuse for mistreating people in detention. Ever.

Then in this morning’s news (via LA Observed):

Sheriff’s deputies used tear gas to put down a riot that broke out Tuesday afternoon and involved 400 or so detainees at the Mira Loma immigration detention center in Lancaster, today’s L.A. Daily Journal reports. From the story by Sandra Hernandez:

“We are still searching for injured,” said Sheriff’s Deputy Lt. Chris Walker. “We don’t know how many detainees were injured.” The riot broke out shortly after 1 p.m. “We are still investigating,” he said, adding it was unclear how the melee started. However, detainees who spoke with the Daily Journal said the riot broke out after a guard allegedly allowed some gang members into barracks.One person said several barracks were involved in the clash, and detainees were running for safety.

Here’s the link to the rest of the article.

Immigration Detention Centers Under the Microscope