Folks, it is getting boring for me, so it must be getting boring for you. Apparently, 2 Feb 2008 was “Super Graffiti Saturday” for me. After my early encounter with a big deposit near Lincoln, I had additional close encounters during a late afternoon walk.

I’ve been requesting books from the library on line, a nifty service that will do the gathering for you and bring items to your local branch. I order books then force myself to walk to La Pintoresca library because I need the exercise.

Yesterday I picked up a piece of fluff…A Good Year by Peter Mayle. When the film of this book came out, I said “Pshaw! This is just Ridley Scott wanting to hang out in the south of France and make a film with his pal Russell Crowe. Which is probably true, but I finally saw it and it’s quite a nice little film—also beautifully shot. (That last link takes you to the Director of Photography. Here’s a link to a still shot.)

Anyway, a visual record of two (not all) more graffiti decoding opportunities. This one has me stumped: 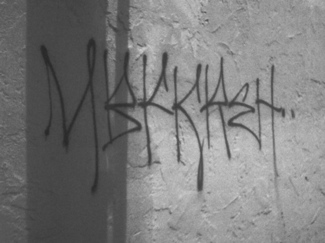 As seen on the northwest corner of Fair Oaks and Montana. Yes, I called the graffiti hotline. Haven’t gone by to see if it has been painted out yet.

Not much mysterious about this one: 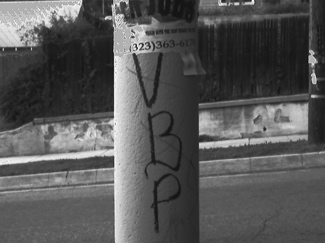 I love that this appears underneath the ad for “teen jobs.”

Probably the “jobs” are those rip-off guys who tell kids they can sell subscriptions and earn points toward a ‘college scholarship.’ The subscriptions are expensive. Someone needs to look into those folks. Have they been to your door, the earnest looking kids who clearly want to go to college but somehow got suckered into the scam? Lots of times the kids aren’t even from this community.

In other news, someone besides the JW‘s knocked on my door this morning. Three Obama people! I told them that Jesus is God and they ran away.

Just kidding…that’s what I say to JWs. I did tell my visitors that they were lucky to catch me because I was late for church, and they “promised to talk to God about that.” As though God doesn’t accept my chronic lateness to church with unconditional love! Oh, Obama supporters, you must work on your jokes.

My household must look like cherry-picking time to Obama people…two registered Democrats, one registered decline-to-state, and three different last names. We talked about the front page of today’s New York Times–the article entitled Nuclear Leaks and Response Tested Obama in Senate. Frankly, it is disappointing. It undermines a comment Obama made in Delaware this morning about getting government out of the clutches of the lobbyists, which is music to any thinking person’s ears.