I try not to be a conspiracy theorist. Conspiracy implies malice aforethought. If you’re going to do that sort of thing, it takes a lot of careful work.

The thing is, the malice that comes from NO thought often rivals the intentional sort. That explains why the City of Pasadena has, willy-nilly, put these lights on certain blocks of Northwest Pasadena. Not certain streets, mind you. Just certain blocks.

(My apologies for lame photo. Cell phone, you know. It was dark. I was hoofin’ it home from work. Tengo hambre. Whatever.) 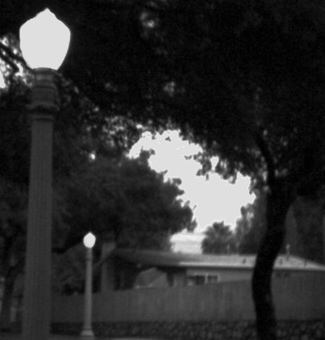 These are the old-fashioned street lights, not as fancy as the ones that line Linda Vista of course (is it possible the LV ones retain their incandescent bulbosity?). These are the lights that your modern urban planner would call outmoded, because now street lights are supposed to:

2) Light the street for a pedestrian, which these do in their better-than-nothing-besides-Pasadena-Heritage-won’t-complain way.

(Specificity alert.) The thing is, just taking Tremont St. as an example (traveling east to west), the old-fashioned lights pictured above are not between Fair Oaks and Navarro, but they are between Navarro and Glen Ave. Tremont ends at Glen. There are none of these lights on Glen (a north-south street–too long). On Wyoming, a short jog to the north of Tremont, there are none of these lights between Glen and Mentone, but west of that intersection the lights resume and then continue to Lincoln Avenue. Which was bless’d with a passel of them some time back.

Does it seem like Pasadena had a few extra lamp posts and plopped them down wherever? Why yes, Ward, I think the Beav was up to something even if he didn’t think he was.

It is okay to make a mistake if you didn’t mean to? In some cases, yes, but that’s not the case here. Somebody meant to put these lights where they are. Thanks to them, I can see part of the way home!

(Logic leap alert.) My brain has hoppity-skipped over to “The Bogaard Dilemma.”  ‘The Chinese weren’t mean to me when I went to their foreign land. I ate their food and everything.  Now, someone’s mom is in prison in Pasadena’s sister city and she wants my help.  But if I help her I’ll have to help evvverrryyyooonnnee.  And I just can’t eat that many girl scout cookies.’

While I’m at it, that grocery cart thing does NOT apply only to older Latinas. I didn’t have the cojones disrespect to take the photo to prove it, but I saw it today.  On a street without the fancy streetlights.