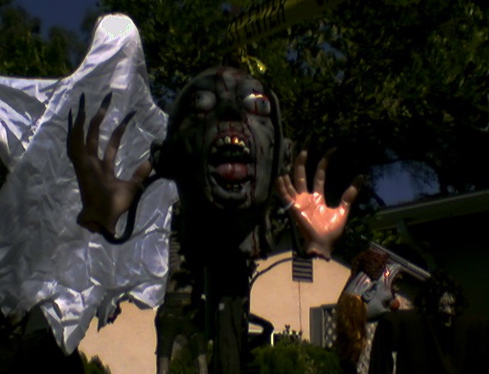 The neighbors went all out this year.

PS – Also in the neighborhood: The idjits are at it again (from the Pasadena Star News)

Between 10 and 15 shots were believed to have been fired in all, Taylor said, though no injuries were reported.

One of the cars involved fled the scene and has not been found, said Taylor. The other car, a Dodge Intrepid, was discovered near the scene where it had crashed into a parked vehicle, however there were no occupants inside, he said.

The Intrepid had bullet holes in it, Taylor added, and spent bullet casings were found at the scene.

No victims have been located, however, and police found no signs that anyone had been struck by the gunfire, said Taylor.

A check of area hospitals late Tuesday turned up no gunshot wound victims who may have been hit in the shooting, Taylor said.

Anyone with information about this incident should call the Pasadena Police Department at (626) 744-4501.