Today I got home from work, and The Scout had prepared dinner (an olive oil stir-fry thing in keeping with his new anti-cholesterol regimen—or regime, as I like to call it) along with a glass of Irony pinot noir. As I was sitting, noshing, and watching Cleveland get five-count-’em-five runs in the 5th inning in Game 1 of the ALDS against the (boo-hiss) Yankees, I heard a grocery cart coming down the street.

Friday is trash pick-up day, and our bins were out on the street ready to be emptied. It’s typical on a Thursday night to hear the sounds of glass and aluminum clanging as someone digs through your recycling bin, along with sounds of laden grocery carts (more jangling) being pushed down the street.

The city frowns on it, but it happens all the time: People come along and take the glass and aluminum out of recycling bins. I don’t particularly mind, though noise in the middle of the night is a bit of a bother. My bin gets picked over multiple times. Once in a while, a bottle will roll down the street, making a sound similar to the sound a rolling bottle makes at the Hollywood Bowl.

I’m not sure exactly how the woman pictured below was planning to get the goods out of my bin, since she’s pretty short and there were lots of newspapers covering up this week’s diet root beer and wine bottle collection. I went out and helped her, digging way down to the bottom. Then I ran back in the house and poured the last glass of Irony so I could give her that bottle too. I asked her to pose with the bottle for me, and she did. 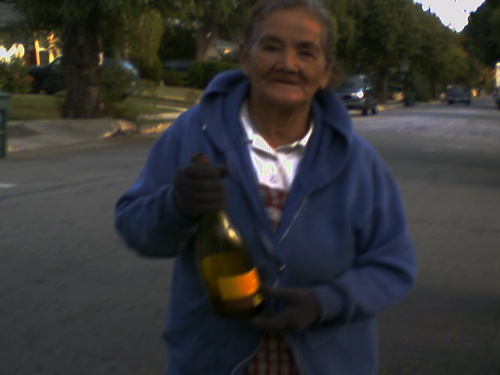 Ten minutes later, a mom pushing a kid in a stroller came along and looked in my bin. When she saw me, she quickly moved on.

Two women—one old, one young—digging through my recycling for their survival. This, too, is Pasadena.